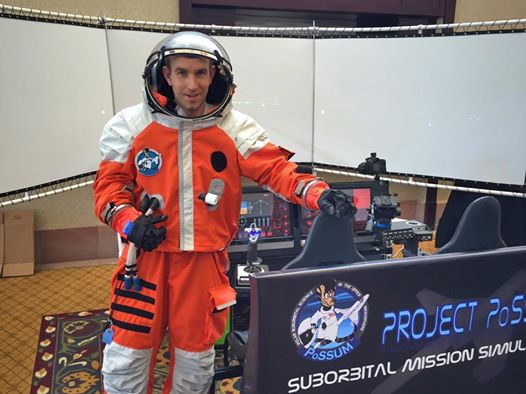 Project PoSSUM was a sponsor of this year’s Next Generation Suborbital Researcher’s Conference in Broomfield, CO. This conference brought together vehicle developers with the researchers in suborbital space. Project PoSSUM held a panel that was hosted by PoSSUM members Dr. Rui Moura, Jorge Latre, Blake Keller, and Dr. Jason Reimuller. PoSSUMSim was also debuted in the hotel lobby, where interested persons could fly through a noctilucent cloud on a simulated PoSSUM suborbital mission! The fifth Next Generation Suborbital Researcher’s Conference will be held in Broomfield, CO in June 2017.

PoSSUMSim is a version of the suborbital mission simulation facility used at the Embry-Riddle Aeronautical University to train PoSSUM Scientist-Astronaut Candidates and will be used to support PoSSUM Academy programs in 2017.