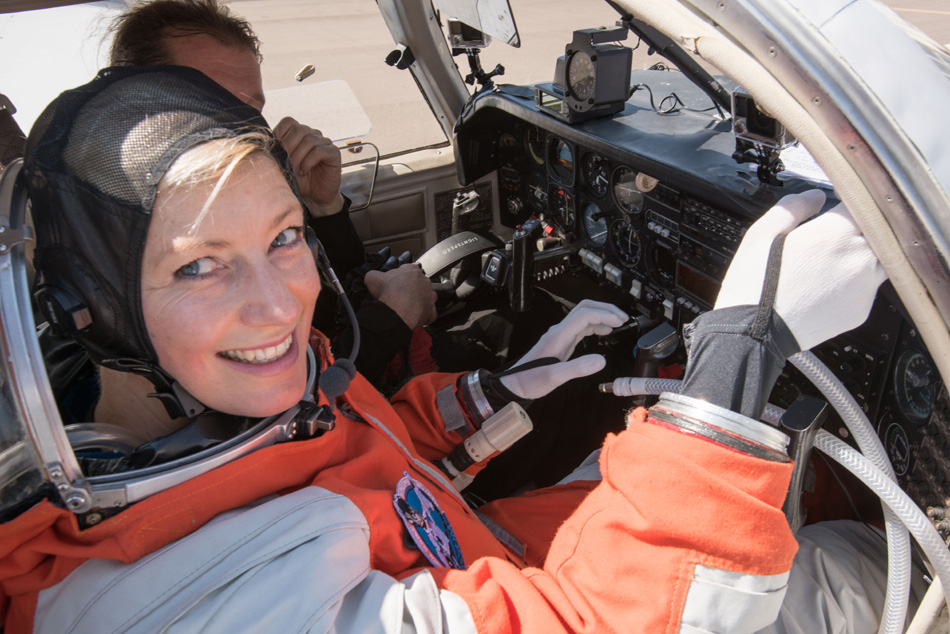 Project PoSSUM conducted its first in-flight evaluation of the Final Frontier Design (FFD) 3G IVA spacesuit in the cockpit environment on July 30, 2016. The test was conducted in a Mooney M20K aircraft, flown from Boulder Municipal Airport, and assessed the operational envelope and the ability of one wearing the suit to make fine controls of the aircraft.

Dr. Sarah Jane Pell is an Australian artist and explorer and also a graduate of PoSSUM Scientist-Astronaut Class 1601. During the flight, she evaluated the spacesuit while she performed a variety of in-flight maneuvers, including standard-rate turns and climbs, engine power adjustments, and landing gear and flap extension and retraction. The Mooney aircraft was chosen because the cockpit has a volume and an operational envelope typical of existing spacecraft. Further, the aircraft’s controls require significant dexterity to operate.

The test was conducted as part of the PoSSUM Bioastronautics Program, an opportunity available for PoSSUM Scientist-Astronaut and PoSSUM Academy graduates, and follows a ground evaluation test of the suit’s interface with a spacecraft seat. The next stage of evaluations will be held in Ottawa, Ontario from 10-14 October 2016 where a team of 16 Project PoSSUM Scientist-Astronaut Candidates will evaluate the seat in microgravity and high-G conditions through a series of four parabolic flights, extending upon phase-one tests that were successfully completed in October 2015.