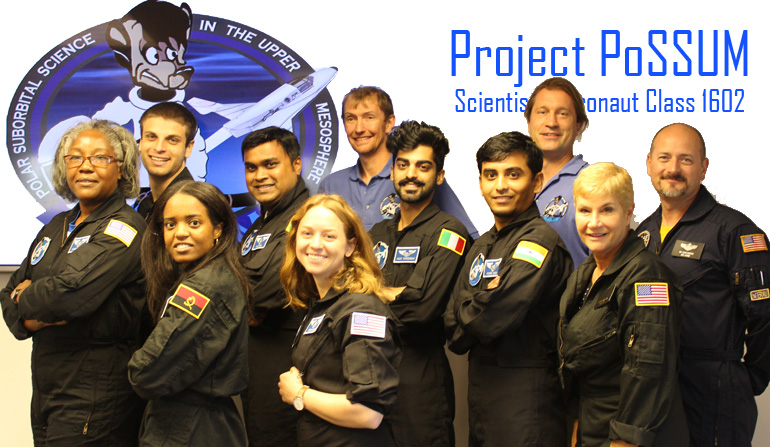 Project PoSSUM, a non-profit research program devoted to the study of Earth’s upper atmosphere, announced that it has graduated eight new Scientist-Astronaut Candidates as part of PoSSUM Scientist-Astronaut Class 1602 along with the first ‘Advanced PoSSUM Academy’ class. Both courses have been designed by former NASA astronaut instructors and are hosted at the Embry-Riddle Aeronautical University in Daytona Beach, Fla. and prepare students to conduct research on commercial space vehicles as part of an international research campaign dedicated to the study of our global climate.

Next up for the new PoSSUM graduates is an opportunity to evaluate spacesuits on zero-G parabolic flights in Ottawa, Ontario next month as part of the PoSSUM Bioastronautics Program. In this program, the students will learn about microgravity research campaign planning and operations while they evaluate prototype spacesuits, spacecraft seat concepts, suit/seat interfaces, and ingress and egress procedures. Additionally, graduates will participate in educational outreach programs and technology development programs in preparation for suborbital research missions.

Twelve new candidates will be selected for PoSSUM Scientist-Astronaut Class 1701, which will both take place at Embry-Riddle from April 8-14, 2017. Interested individuals should apply online at www.projectpossum.org.