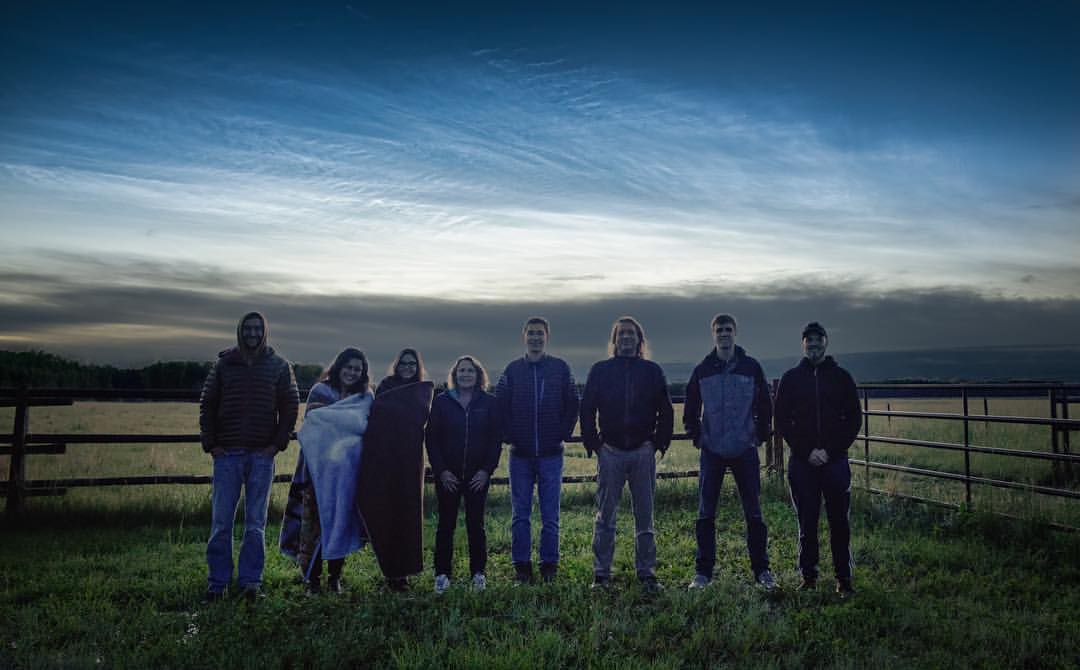 High Level, AB. – A team of 17 Project PoSSUM team scientists and scientist-astronaut candidates spent two weeks in the remote town of High Level in northern Alberta, Canada as part of a flight research team that was deployed to study extremely high and elusive ‘space clouds’ called noctilucent clouds from a research aircraft and two ground stations, each specially equipped with scientific camera systems. These rare clouds form in polar regions at altitudes of 50 miles and are believed to be sensitive indicators of man-made climate change and good proxies of low-density atmospheres such as that of Mars.

On each night, PoSSUM teams deployed to two ground stations: the ‘High Level’ station in the town of High Level, and the ‘Wood Buffalo’ station, located 200km to the east by the Wood Buffalo National Park. From 24 June to 8 July, a total of six sorties were flown along carefully-constructed flight plans to altitudes of 21,000ft; the rare clouds were observed on four of these flights and the data obtained was coordinated with data observed by PoSSUM teams at two remote ground stations. By carefully coordinating the flights with two ground stations, the team hopes to build tomography or three-dimensional images of the fine internal structures of the clouds from which turbulence and instabilities in the upper atmosphere may be better understood.

There was a strong analogy between the aircraft research teams and the simulated sub-orbital missions the students practiced while at Embry-Riddle; each flight presented an opportunity to mature operational planning, refine Crew Resource Management techniques, and improve how the camera systems are operated. “The air crew and both ground teams were observing the same region of sky; we wanted to demonstrate tomographic techniques to view cloud structures in 3D and also determine how altitude can improve our ability to study noctilucent clouds.” explained PoSSUM command pilot Dr. Jason Reimuller, “Further, the imagers deployed were designed for the NASA-funded ‘PMC-Turbo’ balloon mission designed to study these clouds, and the PoSSUM observations helped validate these instruments on actual noctilucent cloud structures.”

Coordinating closely with each ground station, the teams devised a method where all camera stations could target the same region of interest in real-time. The PoSSUM students directly applied the skills they obtained during their PoSSUM scientist-astronaut training to this research campaign, as each flight required precise navigation, effective communications and crew resource management techniques, and an intimate knowledge of the cameras and their control systems. Every minute of flight along the pre-determined flight path came at the expense of many hours of preparations, and each flight sortie learned from the lessons of the previous: camera exposure and sequencing techniques were optimized, means to eliminate jitter was progressively mitigated, and teams better characterized the effects of the windows and filters the cameras were looking through.

“The first night we arrived presented a good flight opportunity, and teams had little time to rest before their midnight departure.” Reimuller said, “Flying along the 58th parallel, the remoteness of northern Alberta created a darkness that made it difficult to fly with any visual reference, but as fortune had it, we were greeted by an intense display of noctilucent clouds that intermingled with aurora. For many of the PoSSUM graduates, it was the first time they had the opportunity to experience these clouds in person.”

A series of videos was produced during the campaign and may be viewed on the PoSSUM website: http://new.projectpossum.org/research/airborne-nlc-tomography/