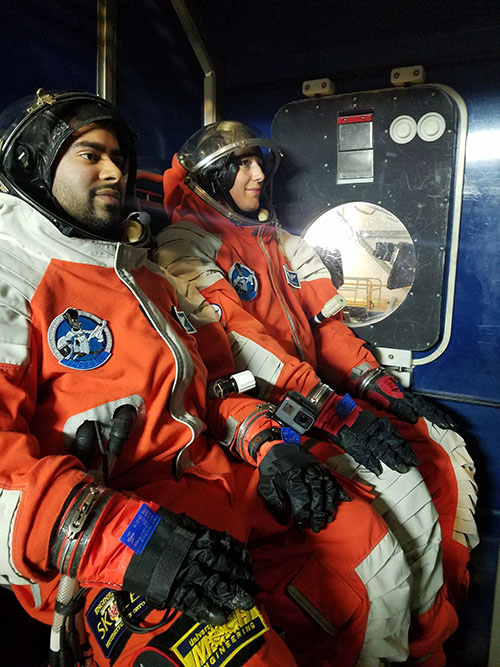 BOULDER, Colo. – This April, a group of Project PoSSUM citizen-scientists will conduct a series of tests of an IVA spacesuit developed by Final Frontier Design of Brooklyn, NY. These tests will be held at Survival Systems USA in Groton, CT. and will be the first post-landing tests of a commercial spacesuit in water, an essential step towards certifying the spacesuit for flight.

The tests will use a full-scale fiberglass mockup of the Orion spacecraft to enable operational research of side hatch or top hatch post landing egress procedures in a space suit in various conditions. The research team will also train to use the space suits in ejection and parachute entry scenarios. A team of 10 PoSSUM graduates recently completed an intensive educational and training program developed by former NASA test designers in preparation for these tests.

“For three years, teams of PoSSUM graduates have been conducting research leading to the certification of these space suits for flight. Following extensive tests in zero-G, high altitude chambers, and simulated spaceflight, these post-landing tests are the next essential step.” said Project PoSSUM Executive Director Dr. Jason Reimuller, “Human performance in emergency egress scenarios is intrinsically difficult to quantify, yet drives both space suit and vehicle design. We hope the highly-diverse PoSSUM team provides results of benefit to spacecraft designers.”

Former NASA astronaut instructor and system engineer Ken Trujillo will lead the PoSSUM team to provide a similar education and training experience as NASA astronauts receive. The post-landing tests will mature various space suit technologies including a Life Preserver unit (LPU), neck dams, parachute harnesses, egress systems, and an Emergency Breathing Apparatus (EBA). In addition to qualifying the technology, the tests will validate training procedures which would later be used to qualify PoSSUM graduates to use the suit for flights in excess of 50,000ft in high-altitude aircraft, a feat that the team hopes to accomplish later this year. For this test program, the team developed a parachute descent and drop system to simulate parachute drops and raft ingress operations while in a space suit.

“Outside of government space agencies there is no spaceflight focused emergency operations training available to researchers, academia, or civil spaceflight operators.”, said PoSSUM’s Astronautics Training Director Mr. Ken Trujillo, “The courses, tests and hardware we’re developing will, hopefully, build the industry database and lead to improved systems, operations and safety to all involved in the civil space industry.”

The 10 selected Project PoSSUM graduates have met a number of strenuous prerequisites prior to their involvement with this novel test, including completion of advanced scuba certifications and the PoSSUM ‘Spacecraft Egress and Rescue Operations’ (SERO) course, which was introduced in April 2016 as a collaborative effort between Survival Systems USA and Project PoSSUM. The SERO course is the first professional course on the landing and post-landing phase of manned spacecraft missions and covers nominal and contingency landing scenarios, post-landing planning, rescue and recovery architecture design, egress systems and operational procedures, deconditioning and post-landing survivability, generalized egress skills, and emergency egress bottle use.