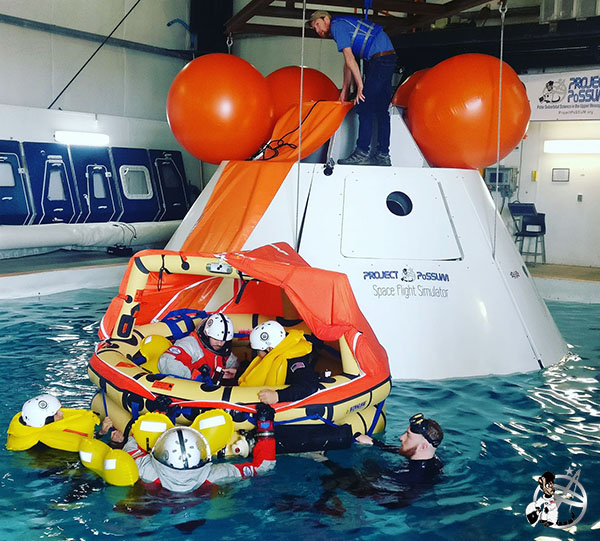 GROTON, Conn. – Last week, a team of 12 Project PoSSUM scientist-astronaut candidates served as test subjects for the first post-landing tests of a commercial spacesuit at Survival Systems USA in Groton, CT. The test program was designed to qualify a 3G IVA spacesuit, developed by Final Frontier Design of Brooklyn, NY, for post-landing operations, an essential step towards certifying the spacesuit for flight. The tests were designed and administered by former NASA astronaut trainers and project engineers; the PoSSUM test subjects received a similar education and training experience as NASA astronauts receive. Specifically, the post-landing tests were designed to mature various spacesuit technologies including a Life Preserver Unit (LPU), neck dams, parachute harnesses, egress systems, and an Emergency Breathing Apparatus (EBA).

The tests will not only qualify the technology but also the training procedures will be used to qualify PoSSUM graduates to use the suit for flights in excess of 50,000ft in high-altitude aircraft, a feat that the team hopes to accomplish later this year. The PoSSUM team also hopes that the research will complement the post-landing research currently being conducted by NASA by involving a wide variety of test subjects.

To support the tests, PoSSUM engineers and technicians developed a full-scale fiberglass and aluminum mockup of the Orion spacecraft to enable operational research on suited post-landing operations for either side hatch egress or a forward hatch egress procedures. The Orion mockup will also enable Extravehicular Activity (EVA) tests in the future and may further be configured as a full simulator to provide general education to students interested in orbital navigation and re-entry operations. The mockup could also be configured for testing in a ‘Stable-Two’ (inverted) configuration.

The tests were supported entirely through investments made by Survival Systems, Final Frontier, and the individual Project PoSSUM citizen-scientists. “One of the purest forms of research flows from those who possess a genuine passion for the science they study.  PoSSUM brings together individuals that share a common enthusiasm for space exploration, and are willing to put forth their own resources, time, and experience to participate in the program.” Said PoSSUM graduate Keith Crooker, “The spacecraft egress and post-landing spacesuit testing was a prime example of citizen-science at its best, and when you see synergy like this — where everyone came together to brave the physically demanding task of taking prototype spacesuits through the rigors of water landing qualification — you know you’re part of something special.”

PoSSUM plans to continue these tests next April using lessons-learned from these initial tests which will improve the performance of the post-landing systems integral to the space suit.