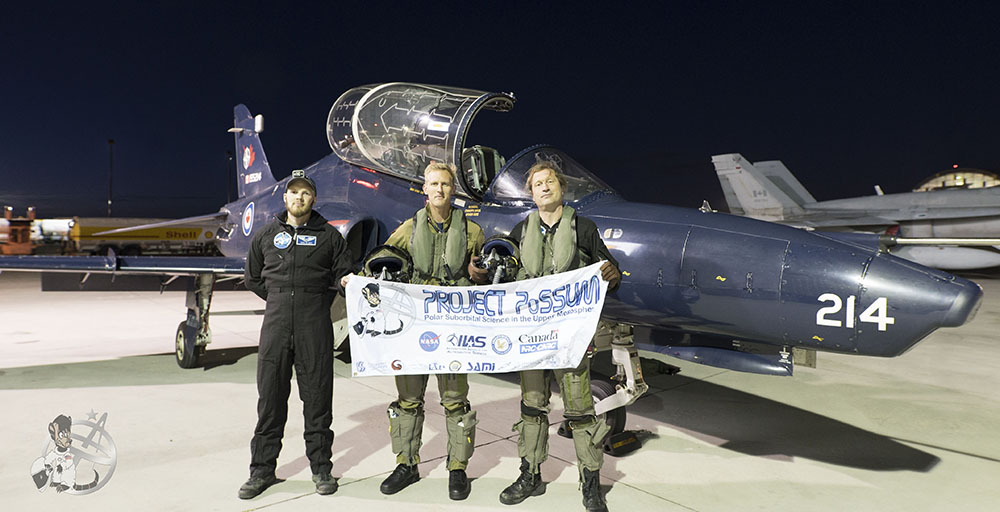 Operating from the Edmonton International Airport, three night flights were conducted along the 56th parallel at altitudes of up to 45,000 ft. From these altitudes, the team was able to image fine structures of noctilucent clouds that the team hopes will reveal more about the highly complex patterns of turbulence and instability in our upper atmosphere.

The research extends upon an airborne research campaign that was conducted by PoSSUM last July in High Level, AB, where a team of 17 PoSSUM members tested NASA-funded camera systems from a Mooney aircraft to be launched this summer on the NASA Science Mission Directorate’s PMC Turbo balloon. PMC Turbo, led by PoSSUM Chief Scientist Dr. Dave Fritts, launched from Kiruna, Sweden immediately following this airborne campaign and, in transit across Canada’s northern territories, is the first dedicated mission to explore the small-scale dynamics of our mesosphere. It is also the first balloon mission to employ a balloon-borne lidar system. PoSSUM next will attempt to validate the imagery taken by aircraft with that of the PMC-Turbo balloon to determine if small-scale turbulence could be discernable from aircraft.

Reimuller, a Co-Principal Investigator of PMC Turbo, served as Mission Specialist onboard the aircraft and operated a specialized gyro-stabilized camera system from the rear seat of the Hawk. Capt. Te Koeti, a NATO Flying Training in Canada (NFTC) Instructor Pilot and the executive officer for 2 CFFTS at 15 Wing, served as Pilot in Command. Mauduit, a professional astrophotographer and science communicator, served as camera specialist.

In October 2018, a team of PoSSUM Scientist-Astronaut Candidates will be back in Canada for a pressurized IVA space suit evaluation in microgravity with the National Research Council in Ottawa. The team will also perform preliminary testing of a prototype Extra-Vehicular Activity (EVA) space suit.

Eventually, the team plans to extrapolate the imagery to suborbital altitudes and use these instruments onboard reusable, suborbital launch vehicles to build tomographic (3D) models of these mesospheric observables, combined with in-situ measurements, to create models of our mesosphere to a resolution previously unattainable.

PoSSUM is a non-profit research and education organization. With members from 31 different countries, PoSSUM conducts upper-atmospheric and space technology research and communicates the science through various educational outreach programs. The next PoSSUM scientist-astronaut candidate class will be held at Embry-Riddle Aeronautical University in Daytona Beach, Fla. from 29 September to 6 October, 2018. Interested individuals should apply online at www.projectpossum.org.