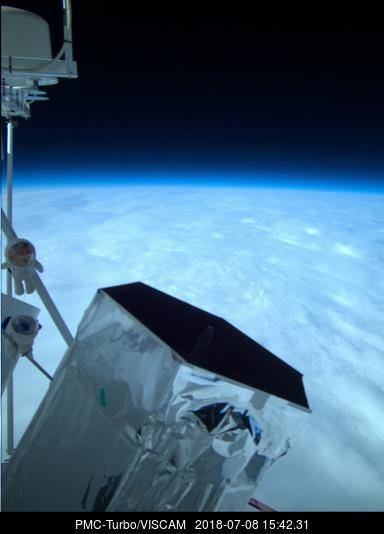 Noctilucent clouds (also known as Polar Mesospheric Clouds, or PMCs, when viewed from space) are the highest clouds observed on Earth, typically forming at altitudes near 83km in the summertime at high latitudes in both hemispheres. They are of particular interest as their presence is believed to be a “miner’s canary” for climate change at high altitudes. Despite their remote location, NLCs also appear to provide the best natural laboratory on Earth for the study of the generation and evolution of geophysical turbulence because very thin NLCs enable imaging of these dynamics throughout their life cycle and to the smallest turbulence spatial scales.

From the balloon’s cruising altitude of 38km, fine features of the clouds can be observed that are not able to be observed with the same resolution from the ground due to turbulence at lower altitudes. The images obtained during the campaign will be used to analyze how atmospheric waves generated at lower altitudes dissipate through various instability and turbulence processes. These processes account for the deposition of significant energy and momentum transported by the waves from lower altitudes and play key roles in weather and climate throughout the atmosphere, but are poorly understood at present.

The 1000 kg PMC-Turbo payload included seven custom camera systems designed to capture high-resolution imagery in the low-light environment viewed from the balloon’s cruising altitude. The PMC-Turbo Experiment also supported the first ever balloon-borne lidar provided by the German Space Center (DLR). The lidar, or “laser radar”, successfully measured the varying temperature field in altitude below and above the NLC layer and the depth and intensity of the NLC layer throughout the flight.

“Our team is excited to have collected what we believe will be a very valuable data set.” said Dr. Fritts, “We look forward to exploring these dynamics that we hope will provide unique insights into the causes and effects of turbulence in the atmosphere, and which we believe will also have relevance to other geophysical fluids such as oceans, lakes, and other planetary atmospheres.”

“PMC-Turbo is observing a little-known region of the Earth and revealing details of this highly dynamic and sensitive environment in ways never before achieved.”, said Dr. Reimuller, “combined with improvements in airborne observational methods and the imminent availability of reusable suborbital spacecraft, it is surely an exciting time to be an upper-atmospheric scientist!”

PoSSUM plans to further use the PMC-Turbo camera technology onboard reusable, suborbital launch vehicles (rSLVs) to build tomographic (three-dimensional) models of these mesospheric observables, combined with in-situ measurements, to create models of our mesosphere to a resolution previously untenable. PoSSUM, an acronym for ‘Polar Suborbital Science in the Upper Mesosphere’, is a 501(c)(3) non-profit research and education organization that conducts upper-atmospheric and space technology research while communicating the science through various educational outreach programs. The next PoSSUM citizen-science programs will be held at Embry-Riddle Aeronautical University in Daytona Beach, Fla. from Sept. 29 to Oct. 6, 2018. Interested individuals should apply online at www.projectpossum.org.