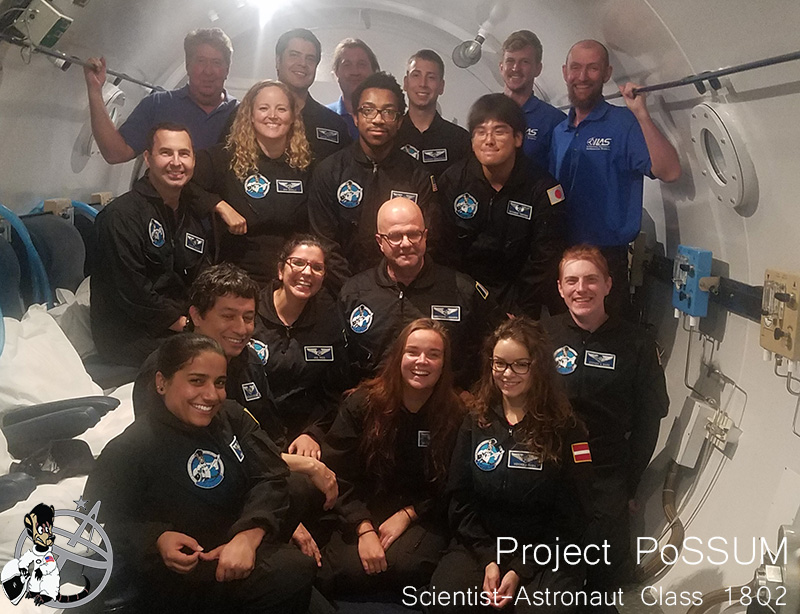 The new PoSSUM graduates will become involved with existing research programs to study the upper-atmosphere, evaluate IVA and EVA spacesuits, and participate in educational outreach and technology development programs in preparation for airborne and suborbital research missions. Some of these new graduates will test IVA space suits in Ottawa this month on parabolic microgravity flights with the National Research Council of Canada, tests that will evaluate the ability of the PoSSUM scientist-astronaut candidates ability to conduct a variety of microgravity research experiments while suited in a space suit or unsuited. Next Spring, many of these graduates will conduct an expanded post-landing egress test using space suits and a full-scale mockup of NASA’s Orion spacecraft in a facility developed by PoSSUM in partnership with Survival Systems USA in Groton, Conn. Following these post-landing tests, PoSSUM members will conduct the first initial tests of a prototype Extra-Vehicular Activity (EVA) space suit as part of a new orbital technologies program called Project OTTER.

Class 1802 was unique in that the class had the ability to test some emerging virtual reality technologies in buoyancy, a first collaborative step with a company that will supply virtual and augmented reality technologies to the OTTER EVA space suit test and development program of which many PoSSUM graduates will become involved with.

“It is always humbling to see the capabilities and motivations of the individuals that commit themselves to the PoSSUM program and its mission” commented PoSSUM Executive Director Dr. Jason Reimuller. “By emphasizing diversity and internationalism, we encourage and embrace everyone to participate in the process of conducting, publishing, and communicating professional peer-reviewed science.”

PoSSUM, an acronym for Polar Suborbital Science in the Upper Mesosphere, uses research aircraft, high-altitude balloons, and commercial suborbital spacecraft to study rare “space clouds” called noctilucent clouds. These elusive clouds can help scientists address critical questions about Earth’s climate, but can only be studied in the upper atmosphere from polar latitudes during a small window of time in the summer. The program also conducts bioastronautics research, spacesuit-related technology development, and educational outreach missions.

Twelve new candidates will be selected for PoSSUM Scientist-Astronaut Class 1901, which will take place at Embry-Riddle from March 23-27, 2019. Interested individuals should apply online at www.projectpossum.org.