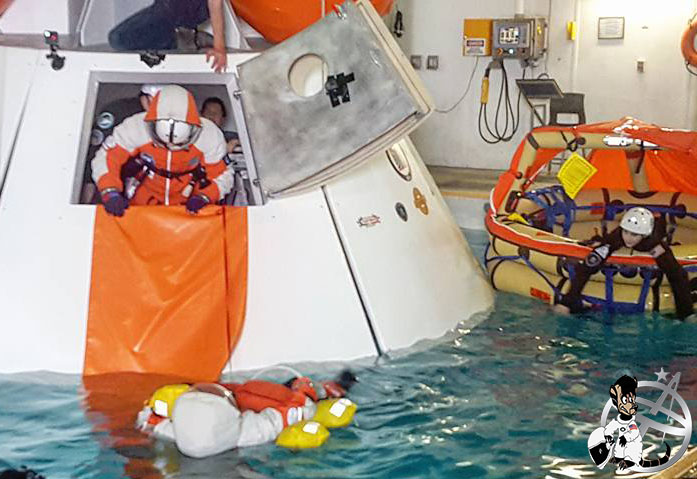 BOULDER, Colo. – Twelve Project PoSSUM citizen-scientists will conduct a series of tests of an IVA spacesuit developed by Final Frontier Design of Brooklyn, NY this April. These tests will be held at Survival Systems USA in Groton, CT. and continue from tests conducted last year which were the first post-landing tests of a commercial spacesuit in water, an essential step towards certifying the space suit for flight at high altitude, a feat the team seeks to accomplish next year.

This year the PoSSUM team will evaluate various post-landing survival equipment including a custom Life Preserver Unit (LPU) designed to keep an astronaut stable in water while evaluating the performance of the PoSSUM members in various spacecraft and ejection seat egress procedures, including scenarios with reduced lighting and elevated sea conditions. Also to be tested will be assisted egress scenarios where some PoSSUM members will be trained to function as rescue teams and address off-nominal scenarios, such as if a crew-member was incapacitated. PoSSUM’s full-scale fiberglass mock-up of the Orion spacecraft will be used again to support operational research of side hatch or top hatch post landing egress procedures in a space suit. The simulator is currently being modified with custom flight software to simulate the entire Entry, Descent, and Landing (EDL) procedures.

The PoSSUM team will also assess the scientist-astronaut candidate’s performance in various ejection and parachute entry training procedures involving a drop into water from a height that will approximate actual impact velocity. For these tests, a special drop system was developed to simulate parachute drops and raft ingress operations while in a space suit.

Similar to last year, former NASA astronaut instructor and system engineer Ken Trujillo will lead the PoSSUM team. Trujillo now serves as PoSSUM’s Astronautics Training Director and aims to provide a similar education and training experience as NASA astronauts receive. “Outside of government space agencies there is no spaceflight focused emergency operations training available to researchers, academia, or civil spaceflight operators.”, said Trujillo, “The courses, tests and hardware we’re developing will, hopefully, build the industry database and lead to improved systems, operations and safety to all involved in the civil space industry.”

To prepare for these tests, the PoSSUM members will have received SCUBA and space suit training, as well an intensive educational and training course titled Spacecraft Egress and Rescue Operations which has been developed by former NASA test designers in preparation for these tests together with Survival Systems, USA. This unique course focuses on spacecraft, space suit, and operational procedure design from a system-engineering perspective of the post-landing phase of crewed space flight missions.

Additionally, PoSSUM’s Dr. Erik Seedhouse will be leading a study comparing various strength measurements of the PoSSUM scientist-astronaut candidates in relation to NASA’s astronaut candidates to assess how these might relate to various post-landing scenarios.

Interested in individuals may enroll in BIO 102 ‘Spacecraft Egress and Rescue Operations’ through the Project PoSSUM website in the Graduate Bioastroanutics Program. Enrollment is accepted until 15 March 2019.