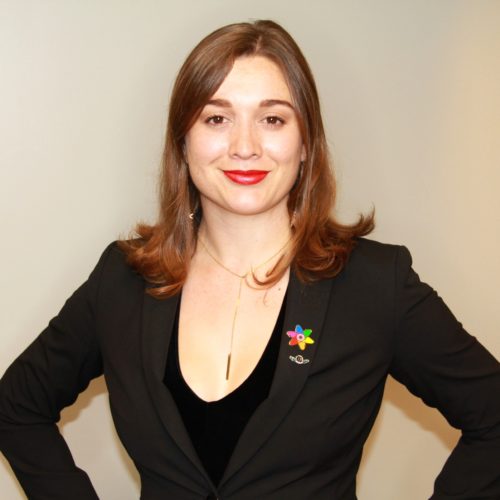 BOULDER, Colo. – Shannon Gatta, a student from the University of Washington, was selected today as the winner of the first Out Astronaut Contest, a competition hosted by the Out Astronaut Project to increase the visible representation of Lesbian, Gay, Bisexual, Transgender, and Queer (LGBTQ) identified persons in Science, Technology, Engineering, and Mathematics (STEM) fields.

Gatta, who identifies as pansexual, later worked as a flight software engineer for NASA and as a system engineer for Ball Aerospace. She also served with the US Army in Afghanistan as one of the few women in her unit. Her next responsibilities may take her to the highest levels of our atmosphere; but her first step will be initial training.

Gatta was awarded a grant to attend the Advanced PoSSUM Academy held at the Embry-Riddle Aeronautical University in Daytona Beach, Fla. There, she will study the principles of conducting scientific investigations onboard commercial spacecraft currently being developed. PoSSUM, an acronym for Polar Suborbital Science in the Upper Mesosphere, is a 501(c)(3) non-profit research and education organization that conducts upper-atmospheric and space technology research that will be enabled by next-generation commercial spacecraft.

“This is an incredible honor to be selected to be the first astronaut candidate under the Out Astronaut organization.” said Gatta “Thanks to them I’m able to serve openly and without apology as a queer woman while training for a research mission to space. I plan to show the world that identifying openly as LGBTQ+ should not be seen as a limitation to success, and crossing the frontiers of space will inspire the community to achieve authentically, and for the world to accept us as we are.”

The LGBTQ community is notably under-represented in STEM professions; according to a recent poll conducted by ‘Pride in STEM’, more than 40 percent of LGBTQ people in STEM are not out and LGBTQ students are less likely to follow an academic career. As a result, there are fewer out LGBTQ STEM professionals serving as role models to LGBTQ youth. The ‘Out Astronaut Project’ highlights the contributions of LGBTQ members currently working in science and space and provides grants to promising LGBTQ students currently pursuing professions in space-related fields. The program eventually intends to fly an ‘Out’ member of the LGBTQ community to conduct a scientific mission in space as a scientist-astronaut.

Of the 561 individuals that have been selected as astronauts or cosmonauts, none have ever identified openly as a member of the LGBTQ community during their tenure as an active astronaut. Dr. Sally Ride was never out until her death in 2012. More recently, Astronaut Anne McClain’s lesbian identity was forced into the spotlight following a highly-publicized domestic dispute.

“Regrettably, many LGBTQ people interested in STEM fear that their identity would be seen as a liability” said Out Astronaut Project Executive Director Dr. Jason Reimuller, “The intent of the Out Astronaut Project is to foster diversity and inclusion in STEM fields by helping out members of the LGBTQ community serve as role models and demonstrate that there are no limits to a career in science.”

Additional competitions are being planned for 2020. To learn more about the Out Astronaut Project or to apply to the next Out Astronaut contest, visit outastronaut.org.

ABOUT THE OUT ASTRONAUT PROJECT

The Out Astronaut Project serves to address the under-representation of Lesbian, Gay, Bisexual, Transgender, and Queer (LGBTQ) people in science and space. We highlight the contributions of LGBTQ members currently working in science and space and provide grants to promising LGBTQ students currently pursuing professions in space-related fields. Its goal is to train and fly an out member of the LGBTQ community as a scientist-astronaut. This person would be an inspiration to the LGBTQ community while enabling cutting-edge research. To learn more about the Out Astronaut Project or to apply to the Out Astronaut contest, visit outastronaut.org.

Project PoSSUM is a 501(c)(3) non-profit suborbital research and education organization conducting citizen-science research in the fields of aeronomy and bioastronautics and providing educational outreach services. Since 2012, PoSSUM has educated citizen-scientists from 43 different countries through the Embry-Riddle Aeronautical University in Daytona Beach, Fla. PoSSUM maintains research partnerships with the Canadian Space Agency, the National Research Council of Canada, and Survival Systems USA. PoSSUM Instrumentation is funded by NASA as part of the ‘PMC-Turbo’ experiment. The PoSSUM Noctilucent Cloud Tomography Experiment is supported by NASA’s Flight Opportunities Program as the ‘Noctilucent Cloud Imagery and Tomography Experiment’. For more information, visit us at www.projectpossum.org or follow us on Facebook at www.facebook.com/projectpossum