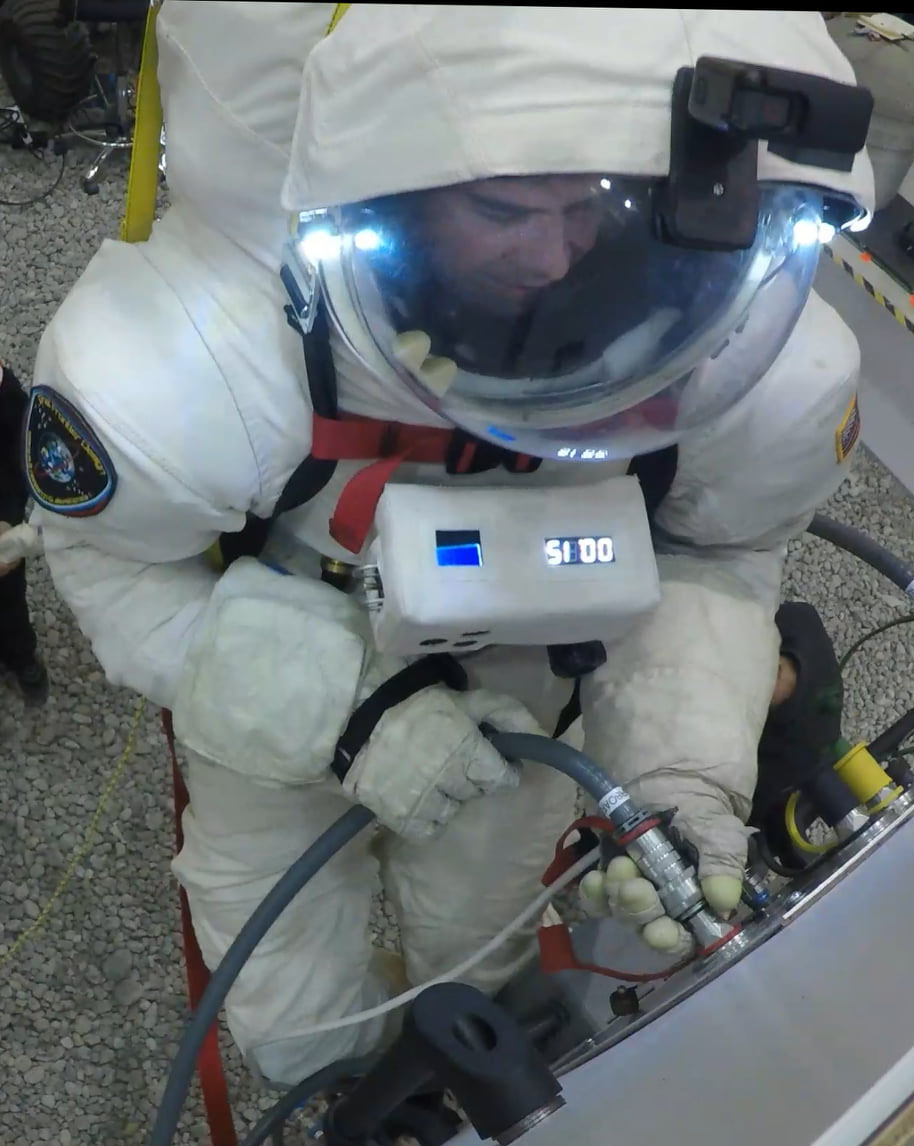 Montreal, Qc. – A team of sixteen Project PoSSUM citizen-scientists recently completed a series of gravity-offset tests and evaluations of an Extravehicular Activity (EVA) space suit prototype at the Canadian Space Agency (CSA) headquarters near Montreal, Quebec. The space suit was developed by Final Frontier Design of Brooklyn, NY and these series of tests mark the first gravity-offset tests of a commercial EVA space suit, an essential step towards its certification.

“Final Frontier Design is proud to announce the completion of our first round of high fidelity EVA space suit testing.  It was a privilege and honor to work with Project PoSSUM at the Canadian Space Agency, and thrilling to see the successful use of our EVA system in multiple relevant environments.” said Final Frontier Design President Ted Southern, “We are excited to have made significant progress towards space qualifying our EVA system in this first round of tests.”

PoSSUM has trained citizen-scientists from over 40 different countries and this evaluation team had been specially trained in advance of these tests through a specialized curriculum that includes study of life support systems, operational space medicine, and planetary field geology. Under guidance from experts in these fields, each team member developed a lunar geological or remote medical tool to be later evaluated during the week-long test at the CSA. Then from 14-18 October, the PoSSUM scientist-astronaut candidates evaluated EVA space suit prototypes in lunar and zero-g conditions.

To support the testing, PoSSUM developed a two-axis gravity-offset system with Kansas State University that combines a hoist with active force control and a ‘frictionless’ air-bearing axis to simulate horizontal motion. The system is designed to be used in terrestrial environments with human test subjects for the simulation of partial gravity or zero gravity environments. The gravity-offset system was installed in the CSA’s facilities for surface EVA simulations. Further, PoSSUM’s Quest Airlock mock-up was used to support orbital (microgravity) simulation.

Evaluations in simulated lunar gravity included walking and various tests of tools developed by PoSSUM’s members that could be used on a surface EVA such as a hammer, shovel, soil sampler, and a rock hardness tester. Control units for remote drone and a 3D lidar imager were also evaluated. Evaluations in simulated microgravity included fluid line and electrical line connections as well as drill use on a mockup of the Quest Airlock used on the International Space Station. In addition to technical studies, PoSSUM evaluated training effectiveness methods and studied human performance in the analog environment. Participants in the EVA space suit were fitted with CSA’s biomonitoring ‘smart garment’ to measure vitals and biometrics such as heart rate, breathing rate, and blood oxygen saturation. More on the EVA test may be found at projectpossum.org/research/eva_bioastronautics/

“The scope of the effort was truly international.” said PoSSUM’s Executive Director Dr. Jason Reimuller, “The diverse PoSSUM team tested a Russian-heritage suit working under a NASA Space Act Agreement at the Canadian Space Agency with contributions from Kansas State and test teams originating from nations around the world.”

PoSSUM, an acronym for Polar Suborbital Science in the Upper Mesosphere, is a 501(c)(3) non-profit research and education organization that conducts upper-atmospheric and space technology research and communicates the science through various educational outreach programs available to students and professionals. New scientist-astronaut candidates are trained in classes scheduled two times per year at the Embry-Riddle Aeronautical University in Daytona Beach, FL. Interested individuals should apply online at www.projectpossum.org.