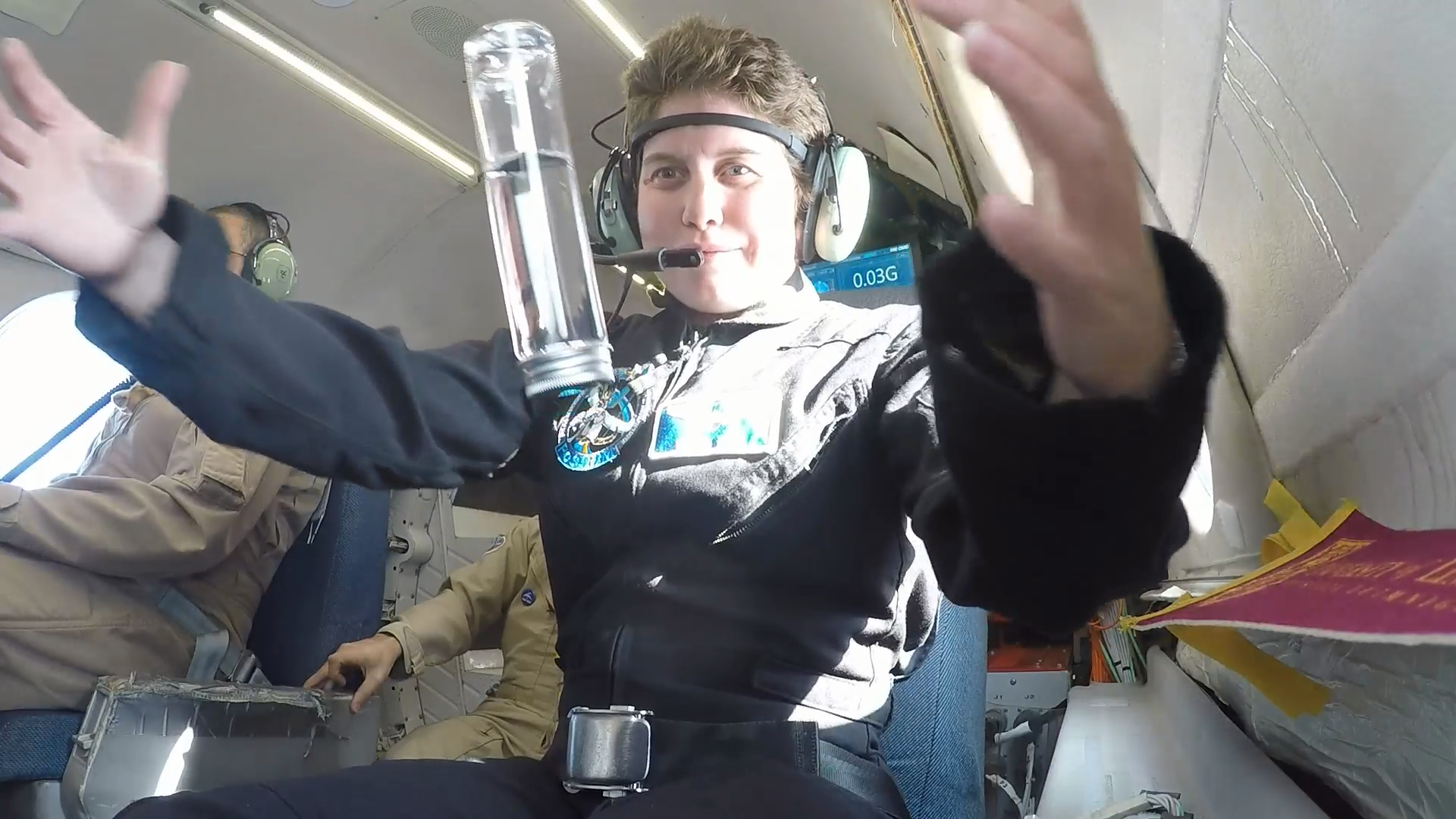 Ottawa, Ont. – This past October, the National Research Council of Canada’s Flight Research Laboratory in Ottawa, Ontario completed its fifth microgravity flight campaign with Project PoSSUM, a non-profit citizen science research organization with members hailing from 43 countries. These flights, commonly known as parabolic or zero-G flights, provide an opportunity to perform unique testing in a weightless environment simulating that of space. This campaign boasted 20 individual research experiments with 19 involved organizations from Europe, Africa, North and South America, over a span of four flights throughout the second week of October.

Among these were Final Frontier Design, a space suit company based in Brooklyn, NY testing an affordable alternative to current intra-vehicular activity (IVA) spacesuits. This year, an improved and lighter air ventilation and pressurization system was integrated.  The flights consisted of both suited and unsuited test subjects, with participants performing specific tasks whilst monitoring and supporting experiments during flight. These experiments include the testing of IVA space suits along with biomonitoring technologies similar to those planned for use on future human space exploration missions.

Additional payloads included solid body rotation experiments developed by undergraduate students through a collaboration with the University of Maryland Eastern Shore, experiments observing equilibrium states of a pure liquid-vapor water system developed jointly between the Massachusetts Institute of Technology and the University of Toronto to better understand how to design water containment systems for use in space, and the testing of new types of food packaging developed by Mission: Space Food whose goal is provide pleasurable and sustainable culinary experiences in space. A variety of experiments led by individual PoSSUM members were also flown including validation of a solar panel deployment mechanism for a satellite, a fluid cell experiment where the effects of laser heating are observed, an experiment observing how a person’s sense of motion is affected through use of virtual reality technologies in microgravity, a brain monitor experiment, a new cup design for use in weightlessness, and various educational experiments.

Another first for the PoSSUM team was the inclusion of four experiments provided through an international student competition led by the PoSSUM 13, an outreach program that organizes international contests to engage more girls and young women in STEM-related fields. Through this program, student experiments from Mexico, Guatemala, Ireland, and Colombia were flown. Ivanna Hernandez, a high school student from of Santa Marta, Colombia won the opportunity to fly with the PoSSUM team and operate her experiment in flight.

PoSSUM Scientist-Astronaut Candidate Dr. Aaron Persad is supported by a Postdoctoral Fellowship Award from the Natural Sciences and Engineering Research Council of Canada to pursue space science research at the Massachusetts Institute of Technology and coordinated this year’s flight campaign. ” Each year, we’ve been pushing the frontier of the type of science and technology we can test in microgravity. In four days, we flew 20 experiments, all of which were human-tended payloads, and several of them reflected improvements in design and function from lessons learned from the results of our previous flight campaigns with the NRC. We also wanted to celebrate the 50th anniversary of the Apollo 11 mission in this year’s campaign and dedicated portions of our flight to recreating a lunar gravity testing environment for some of our experiments. It is exciting that PoSSUM and NRC are asking and answering questions related to getting the next humans to the Moon and eventually to Mars.”

The ability to test performance within a pressurized space suit demonstrates a unique capability that Project PoSSUM introduces to the execution of microgravity research.The Canadian Space Agency and the National Research Council have shown great interest in space suit testing, which can often be limited by the inaccessibility to specialized space hardware. These flights mark the fifth successful campaign in which Final Frontier Design space suits have been evaluated in microgravity by Project PoSSUM researchers.

PoSSUM is a non-profit research and education organization that conducts upper-atmospheric and space technology research and communicates the science through various educational outreach programs. Since 2015, the National Research Council has worked with Integrated Spaceflight Services and Project PoSSUM to provide services for microgravity research in Canada to international customers. Project PoSSUM is working to train and educate citizen scientists to conduct research on future missions on-board commercial suborbital spacecraft. The microgravity campaign preceded PoSSUM’s first collaboration with the Canadian Space Agency where an EVA space suit prototype was evaluated in a gravity-offset laboratory developed through PoSSUM and installed in the lunar test yard at CSA. In April 2020, PoSSUM members will be in Groton, CT for post-landing operational testing using a spacecraft mockup and space suits in water egress scenarios. Following these tests, the first phase of Extravehicular Activity (EVA) space suit tests will then be held. For those interested in getting involved, the next PoSSUM scientist-astronaut candidate class will be held from 10-17 April 2020. Interested individuals should apply online at www.projectpossum.org.