Project PoSSUM conducts aeronomy research and educational outreach using imagery and tomographic techniques from suborbital manned spacecraft and high-altitude balloons. Aeronomy is the study of our upper atmosphere, including the mesosphere.

Aeronomy is the branch of atmospheric science that pertains to the upper atmosphere, which is generally considered to include both the mesosphere and the lower thermosphere into what is commonly termed the ‘MLT’ region.  In this region, solar radiation breaks up atmospheric molecules into smaller particles and ions in a process called ionization, processes that plays important roles in the physics and chemistry of the atmosphere.  Atmospheric tides, excited by solar heating and drive the motion of the upper atmosphere, play a vital role in transporting energy into the lower atmosphere.  Polar circulation causes temperature extremes which contribute to the formation of seasonal phenomena such as noctilucent clouds.  At high latitudes, the upper atmosphere becomes even more dynamic as the Earth’s magnetic field lines direct much of the sun’s high energy particles to the polar atmosphere, creating what we view as the aurora.

Understanding the MLT region is therefore essential to understanding the atmosphere as a whole, but this region has proved the greatest challenge of all regions to study; it lies too high to access by aircraft or balloons and too low to reach by satellite.  Before the advent of reusable suborbital vehicles, expensive sounding rocket campaigns have returned limited but valuable data on the atmospheric chemistry, thermodynamics, and aerosol concentrations of the MLT region, but such campaigns provided only limited opportunities to collect data.  Sounding rockets, unlike reusable suborbital vehicles, have been expensive propositions since the vehicles may only be used once, and recovery efforts usually prove to be costly.

What are Noctilucent Clouds? 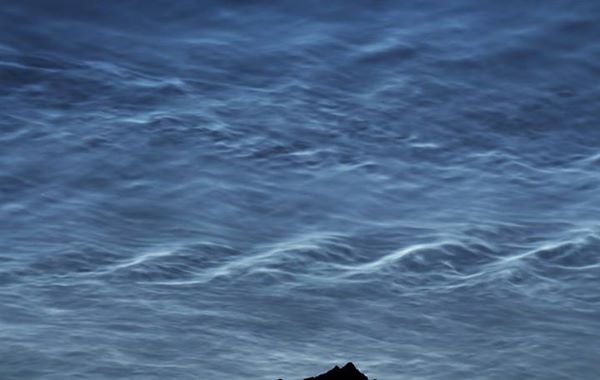 Noctilucent clouds are the highest clouds in the Earth’s atmosphere. These elusive ‘space clouds’ form at altitudes near 83 km (50 miles) high, an altitude way too high to reach by aircraft yet still too low to reach by satellite. Seen from the high latitudes but only in the summertime, these clouds are very distinctive as they appear to glow at night, reflecting the sun’s light long after the sun has set.

The advent of reusable suborbital vehicles provide a new capability to access this region of our atmosphere. Since the vehicle is reused, the costs of a suborbital flight to this region of our atmosphere and back are roughly ten times less than those of a comparable sounding rocket. And payloads can be placed on stabilized platforms and tended to by a human operator.

PoSSUM is designed to study these clouds using new balloon technologies and suborbital spacecraft through means never before available. Specifically, PoSSUM Scientist-Astronauts will construct 3D tomography of the microfeatures of these clouds, much like an MRI makes a 3D model of a person. This will reveal much about the dynamics and thermodynamics of the most sensitive region of our planet, the upper-atmosphere!

Next > About Noctilucent Clouds