What are Noctilucent Clouds?

Noctilucent clouds are the highest clouds in the Earth’s atmosphere, 83 km (50 miles) and are observed slightly below the mesopause in the polar summertime.  These clouds are of special interest, as they are sensitive to both global climate change and to solar/terrestrial influences. The first recorded sightings of noctilucent clouds were reported in 1885 and both satellite and ground-based observations over the past four decades have indicated that the presence of these clouds has been increasing in both frequency and brightness. Scientists now realize that these clouds are very sensitive indicators for what is going on in the atmosphere at higher altitudes as small changes in the atmospheric environment can lead to large changes in the properties of these clouds. Further, since these clouds form on condensation nuclei through cold temperatures and the presence of water vapor – and these properties of the mesosphere are tied to carbon dioxide and methane, the anthropogenic causes of climatic change may be directly related to the presence of noctilucent clouds.

Why do we Care about Noctilucent Clouds?

1. The man-made causes of climatic change MAY be directly related to noctilucent cloud presence.

In general, clouds need two things to form: 1) low temperatures relative to the dew point, and 2) water vapor.  We know that carbon dioxide acts as a net cooling agent in the upper atmosphere (though it warms the lower atmosphere, it radiates more heat away than it traps in the upper atmosphere, causing it to cool).  Further, we know that methane photo-disassociates in the upper atmosphere and a major by-product is water vapor.  Further, the introduction of chlorofluorocarbons (CFCs) in the lower atmosphere depletes the ozone, causing the stratosphere to shrink, and driving the mesosphere to be colder. As carbon dioxide, methane, and CFCs are all largely industrial by-products, they are believed to be man-made contributors to global climate change.  So if we see more noctilucent clouds, colder temperatures and/or increased concentrations of water vapor must exist in the mesosphere, which may be caused by the introduction and upward convection of carbon dioxide, methane, and CFCs in the lower atmosphere.

2. Noctilucent clouds inform us of the critical reentry region for space vehicles

Noctilucent clouds reside near a poorly understood yet critical region to reentry vehicles.  The ground-track of space vehicles traveling to the International Space Station (ISS) missions reach latitudes where the low-latitude noctilucent clouds may be present.  Since we don’t know enough about the mesosphere, manned space missions have chosen to act conservatively, enacting constraints for manned space missions that may be irrelevant. Through a better understanding of noctilucent clouds and the mesosphere, we may be able to design more operable space architecture.

3. Noctilucent clouds provide an analog to low-density atmospheres on other planets

By studying noctilucent clouds here on Earth, we can better model high-altitude, low-density clouds that may appear elsewhere, such as Mars!

Noctilucent clouds have been observed from the ground, through use of sounding rockets, from aircraft, and from a variety of spacecraft.  The advent of reusable suborbital vehicles creates a radically new opportunity to study noctilucent clouds in ways that have either been impossible or cost prohibitive. 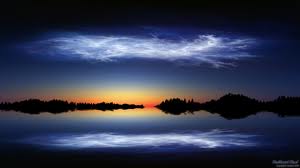 Sounding rockets have provided in-situ observations and measurements of atmospheric constituents since 1962, when particle collectors revealed an abundance of particles of much greater size when the rocket penetrated a noctilucent cloud layer [Hemenway et al., 1964].  Later in 1982, the Cold Arctic Mesopause Project (CAMP) successfully mapped the temperature distribution of the summer mesopause [Philbrick et al., 1984].  Then in 1993, The NLC-93 rocket campaign at Esrange, Sweden, investigated the vertical structure of a noctilucent cloud layer in-situ, showing little vertical variation [Gumbel and Witt, 1998]. The question of particle size was further addressed in 1999 with the MIDAS-DROPPS rocket campaign, which used the scattering phase functions of NLCs through optical photometers [Gumbel et al., 2001]. Then in 2007, the PHOCUS rocket-borne experiment  found no general difference between neutral and charged particles. [Hedin et al, 2007].

When studying noctilucent clouds, aircraft can provide improved spatial resolution, time evolution imagery, and the ability to validate space-borne imagers. An aircraft may be positioned in a way to obtain imagery of improved resolution and contrast and be synchronized with spaceborne imager overpasses.  An aircraft is also able to track a prominent cloud that is detected by the AIM spacecraft, a capability that does not exist with ground-based or space-based imagery, and produce imagery of the noctilucent cloud’s lifespan, from formation to dissipation.
The first dedicated airborne campaign to study noctilucent clouds was led by Dr. Jason Reimuller.  A synchronized observation of a noctilucent cloud by the airborne platform and polar mesospheric cloud by the CIPS instrument on the AIM satellite was recorded on 6 July 2009 at 06:49:24 UT from an altitude of 18000 ft (5486m). The coordinated observations enabled investigation of CIPS performance at the day-to-night terminator and made it possible to relate the different resolutions of the two types of imagery to identify noctilucent cloud features, improving the ability of the AIM satellite to extract data near the day-night terminator.  This represented the first such coincident measurement of noctilucent clouds from airborne and spaceborne instruments and verified that synchronous imagery of noctilucent cloud structures could be obtained through use of airborne and spaceborne imagers [Reimuller, 2011].

Satellite observations over nearly three decades have provided a consistent measure of polar mesospheric cloud occurrence, latitudinal extent, and brightness and indicate that the presence of these clouds has been increasing in frequency and extending to lower latitudes [Shettle et al., 2009;Deland et al., 2006].  American and Soviet astronauts have observed the phenomenon from space as early as 1970 and subsequent observations have been made from spaceborne platforms such as the Halogen Occultation Experiment (HALOE) and the Student Nitric Oxide Explorer (SNOE) [Merkel et al, 2003].  The most comprehensive advances to the understanding of polar mesospheric clouds have come from spaceborne platforms such as the Orbiting Geophysical Observatory (OGO-6), the Solar Mesospheric Explorer (SME), and most recently the AIM satellite.

Aeronomy of Ice in the Mesosphere (AIM)

The Aeronomy of Ice in the Mesosphere (AIM) Satellite is the first satellite with a primary mission dedicated to the study of polar mesospheric clouds.  It has aboard it three payloads: 1) the Cloud Imaging and Particle Size (CIPS) instrument, providing a 2-D panoramic look at polar mesospheric clouds by collecting 360 degrees of multiple images, 2) the Solar Occultation for Ice Experiment (SOFIE) payload, measuring the variability of cloud particles with respect to their altitude and their chemical composition, and 3) the Cosmic Dust Explorer (CDE), recording the amount of space dust entering Earth’s atmosphere in order to assess whether space dust provides the foundation for the cloud condensation nuclei in the formation of noctilucent clouds. As shown in the image on the left, the AIM satellite typically makes fifteen overpasses each day. This plot shows how each overpass can be superimposed during a period of one day.

The advent of reusable suborbital vehicles provide a new capability to access this region of our atmosphere. Since the vehicle is reused, the costs of a suborbital flight to this region of our atmosphere and back are roughly ten times less than those of a comparable sounding rocket. And payloads can be placed on stabilized platforms and tended to by a human operator.

PoSSUM is designed to study these clouds using new balloon technologies and suborbital spacecraft through means never before available. Specifically, PoSSUM Scientist-Astronauts will construct 3D tomography of the microfeatures of these clouds, much like an MRI makes a 3D model of a person. This will reveal much about the dynamics and thermodynamics of the most sensitive region of our planet, the upper-atmosphere! 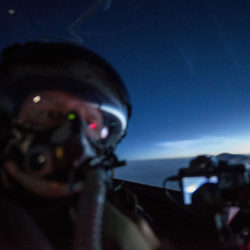 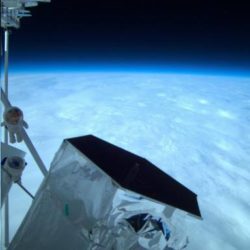